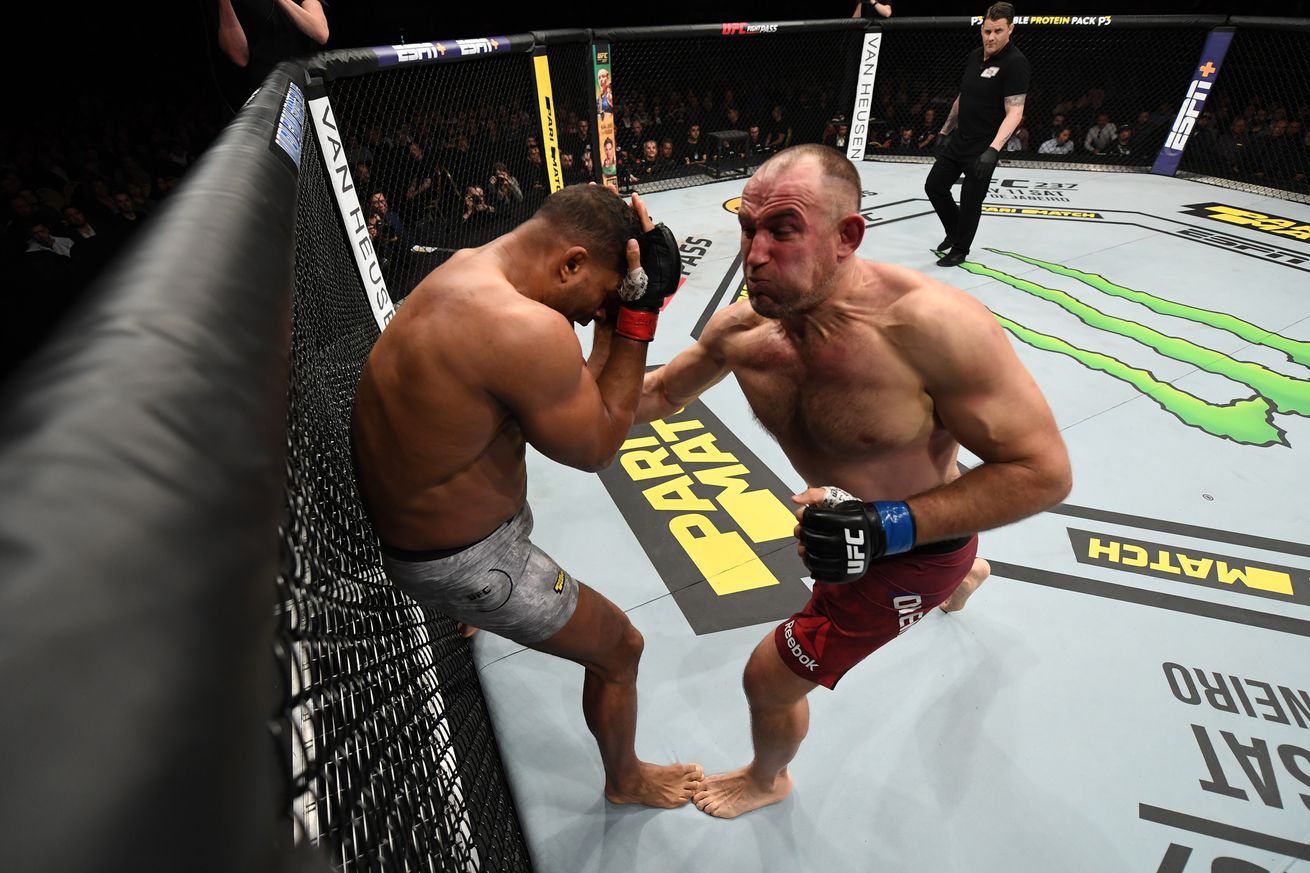 Heading into 2019, Aleksei Oleinik was riding a strong couple wins and good overall stretch, making him an unlikely contender in his forties. Unfortunately, consecutive first-round knockout losses ended those hopes, but the Russian athlete is not about to let a couple losses worry him — the man has 71 professional fights after all! That’s a fair few more than Greene, the 33-year-old prospect who began his career back in 2012. Greene opened his UFC career with an impressive three-fight win streak, but he came up short last time out to the power punches of Sergei Pavlovich.

Let’s take a closer look at the keys to victory for each man:

The result of Oleinik’s last fight is worrying. It’s not that he was knocked out, as that’s an unfortunate reality of fighting at Heavyweight. Instead, it’s the fact that Walt Harris was able to simply walk forward and blast him in the opening seconds that is concerning ahead of this match up.

Greene is not as proven as Harris, but he is lanky, powerful and likely inspired by Harris’ recent performance. As such, Oleinik has to be careful early on, and make sure that if he does trade with his younger foe, he does so on his terms.

Beyond that, Oleinik has one strategy: latch on and squeeze.

Record: 8-3
Key Wins: Jeff Hughes (UFC Fight Night 146), Junior Albini (UFC on ESPN 3), Michel Batista (TUF 28 Finale)
Key Losses: Sergei Pavlovich (UFC Fight Night 162), Jeff Hughes (LFA 38)
Keys to Victory: Greene is still figuring himself out as a fighter. “The Crochet Boss” has the build of a long range sniper, and he tries to fight that way. However, he’s had difficulty sitting down on his punches, which leaves him at risk of an opponent simply walking through his strikes to land a bigger one.

In addition, Greene has submitted five of his past foes, though offensive jiu-jitsu is quite unlikely to help him here.

Oleinik is not a difficult man to hit. Greene has an 82-inch reach — admittedly, Oleinik’s own impressive 80 inch reach does dull that usual advantage a bit — and can fire hard straight punches. The strategy here is exceedingly obvious: circle away from the wide hooks and slam a cross down the center when Oleinik advances.

Another Oleinik-specific key here is to be extremely wary of underhooks. That doesn’t make the least bit of sense, as underhooks are hugely important to avoid takedowns and advance position both in the clinch and on the mat. However, Oleinik willingly gives up double underhooks to attack the neck with his trademark Ezekiel choke — Greene does not want to be the next victim.

It’s likely to be entertaining, if nothing else.

Oleinik brings the fight every time and is always dangerous with his crafty and crushing jiu-jitsu. However, he’s definitely not a title threat, and at 42 years of age, it really seems to be a question of how long Oleinik wants to keep fighting. The answer to that query is likely dictated by how well he does in the cage, so a win would likely help prolong his UFC career.

Divisionally though, Oleinik is not really a factor.

As for Greene, this is a solid opportunity despite the fact that Greene came up short last time out. Despite his recent losses, Oleinik remains the No. 12-ranked fighter in the division. A victory here would be Greene’s first ranked win, a solid accomplishment for the relatively young Heavyweight.

At UFC 246, Aleksei Oleinik and Maurice Greene will go to war. Which man will remain standing when the dust settles?

Remember that MMAmania.com will deliver LIVE round-by-round, blow-by-blow coverage of the entire UFC 246 fight card this weekend RIGHT HERE, starting with the Fight Pass/ESPN+ “Prelims” matches online, which are scheduled to begin at 6:30 p.m. ET, then the remaining undercard balance on ESPN at 8 p.m. ET, before the PPV main card start time at 10 p.m. ET on ESPN+.

To check out the latest and greatest UFC 246: “McGregor vs. Cerrone” news and notes be sure to hit up our comprehensive event archive right here.