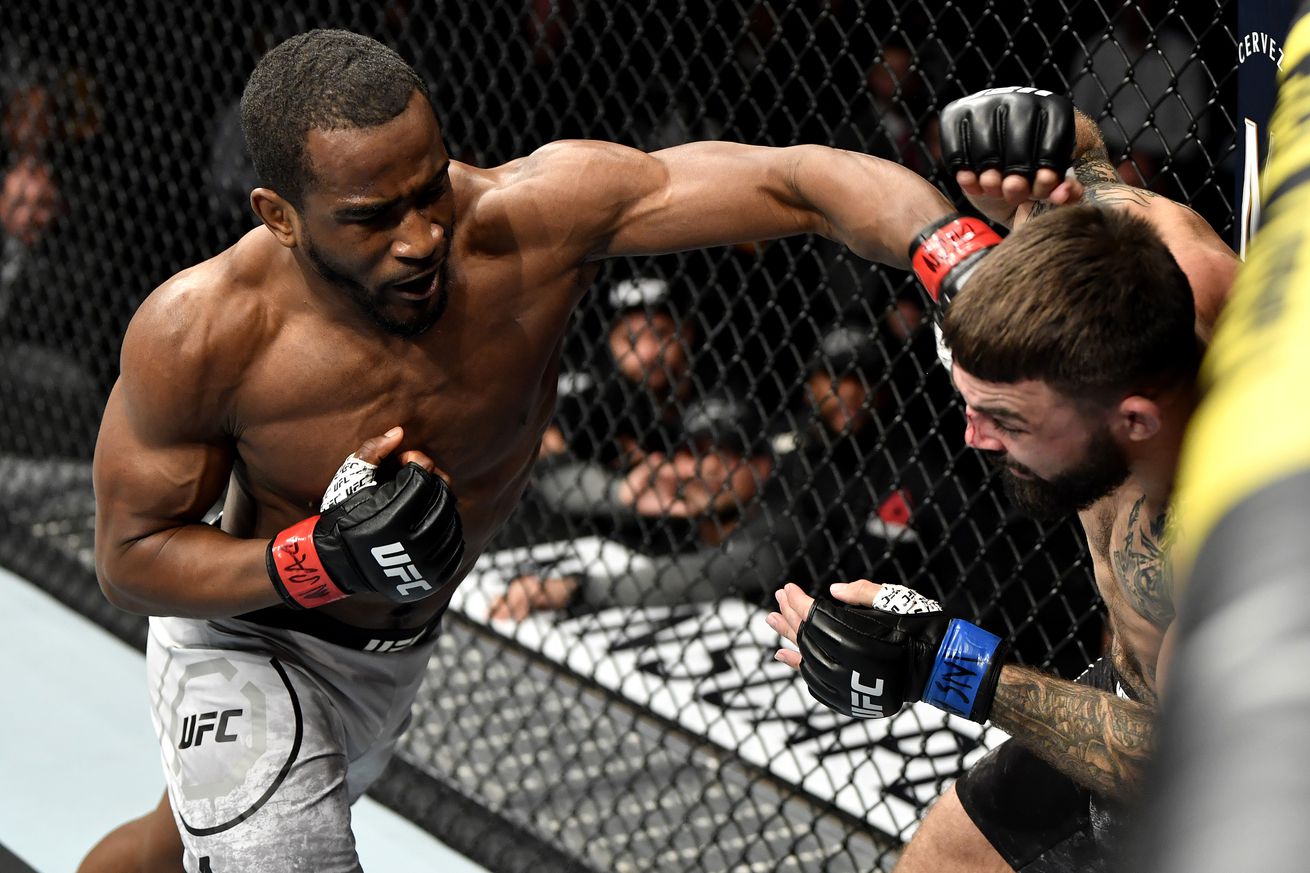 Many quality fighters and prospects have now made their way to the Octagon via Dana White’s Tuesday Night Contender Series (DWTNCS). While none have been able to capture a title yet — it’s still early in that regard — there are a few fast-rising standouts worth keeping an eye on. Sean O’Malley may have grown his name the most, but Geoff Neal is perhaps the most likely to make such a run.

Neal is 5-0 inside the Octagon, with four of those wins coming via stoppage.

Of course, climbing the ladder requires finding opponents willing to fight him, which has proven an issue for “Handz Of Steel.” Despite earning a position at No.10 in the Welterweight rankings, Neal continues to struggle finding willing opponents.

In particular, Neal is quite irked at Michael Chiesa for ignoring his callouts. “I feel disrespected which makes it kind personal because I know he sees my posts and he made some comment that he doesn’t want to fight me because I said something about him not wanting any smoke, which is kind of a weak-ass excuse not to fight me,” Neal told MMAJunkie’s Mike Bohn. “I’m No. 10 now. I was No. 11 before, like we’re not that far off in the rankings. It’s not like I’m some unranked dude trying to call you out.

“The fight makes perfect sense. He wants to chase after Colby Covington – you only have three fights in the welterweight division and you’ve fought two dudes that are (expletive) ’55ers. You can’t really say that you were above me. He has this air of entitlement and I (expletive) hate that (expletive).”

Aside from “Maverick,” Neal expressed an interest in fighting most of the division’s proven names, like the recently humbled Tyron Woodley. “Of course I want to move up in the rankings but it’s getting to that point where I’m just going to take whatever opportunity that’s going to come my way,” Neal said. “I want Chiesa, Ponzinibbio, I wanted ‘Wonderboy’ but I doubt he’ll take that fight; Lawler, Woodley. But it’s getting to that point where I might have to fight backwards.”

Despite his success and high ranking, Neal revealed recently on Twitter that he was back working as a waiter while searching for a dance partner. While it’s surely frustrating to be in such a position, Neal can at least take solace in the fact that the previous “most ducked” Welterweight eventually captured the title.

This is the first look at the testing and infrastructure being built on Fight Island (Yas Island, Abu Dhabi). This experience is going to so BADASS for my fighters and my staff!!! #InAbuDhabi @VisitAbuDhabi pic.twitter.com/dog3eIhxxC

If I’m reading this correctly, UK is starting a program where you can essentially get certified in MMA?

The “Fight of the Year” race is heating up, but Joanna Jedrzejczyk vs. Weili Zhang remains the top contender.

Rutgers vs Penn State next year is gonna be wild

Imagine having the audacity to tell a longtime professional Muay Thai fighter famous for kicking the sh*t out of legs that he’s bad at low kicks.

Spent most of yesterday getting trolled over my low kicks…apparently there’s no power in them and I drop my hands every time and they don’t work in a fight. What a great place the internet is #muaythai #kingofthelegkick

Vitor Belfort is working out with Wiz Khalifa for unknowable reasons:

Caption pretty much says it all; running forward with no regard to defense does not produce the best results.

Brutal first round KO by Ilya Bochkov. Commentator compared it to Miocic/Werdum and yeah, pretty much. #MMASeries8 pic.twitter.com/RpIA3y0VXn

I don’t want to be overly negative based on 10 seconds worth of fight footage, but based on how Muminov moved his legs and lifted his elbow to punch, this appears a mismatch.

Some very pretty shots of Arizona:

⠀ From the Grand Canyon’s desert oasis, to the trails around Phoenix and the red rock cliffs of Sedona, Arizona is full of some of the best hiking in America Tag a friend who should explore the southwest with you! ⁣Photos by @t_secody , @v_outdoors, @tiffpenguin @neilbennett3, @ryanditrichphoto, @petit.yogi, @everchanginghorizon Always #wondermore

A post shared by WONDERLUST COLLECTIVE (@wonderlustcollective) on Jun 30, 2020 at 8:05am PDT

Midnight Music: Being a Kanye stan is exhausting. Fortunately, while I’m not in love with his new single “Wash Us In The Blood,” it’s so, so much better than his garbage last album that I am once again optimistic for the future.