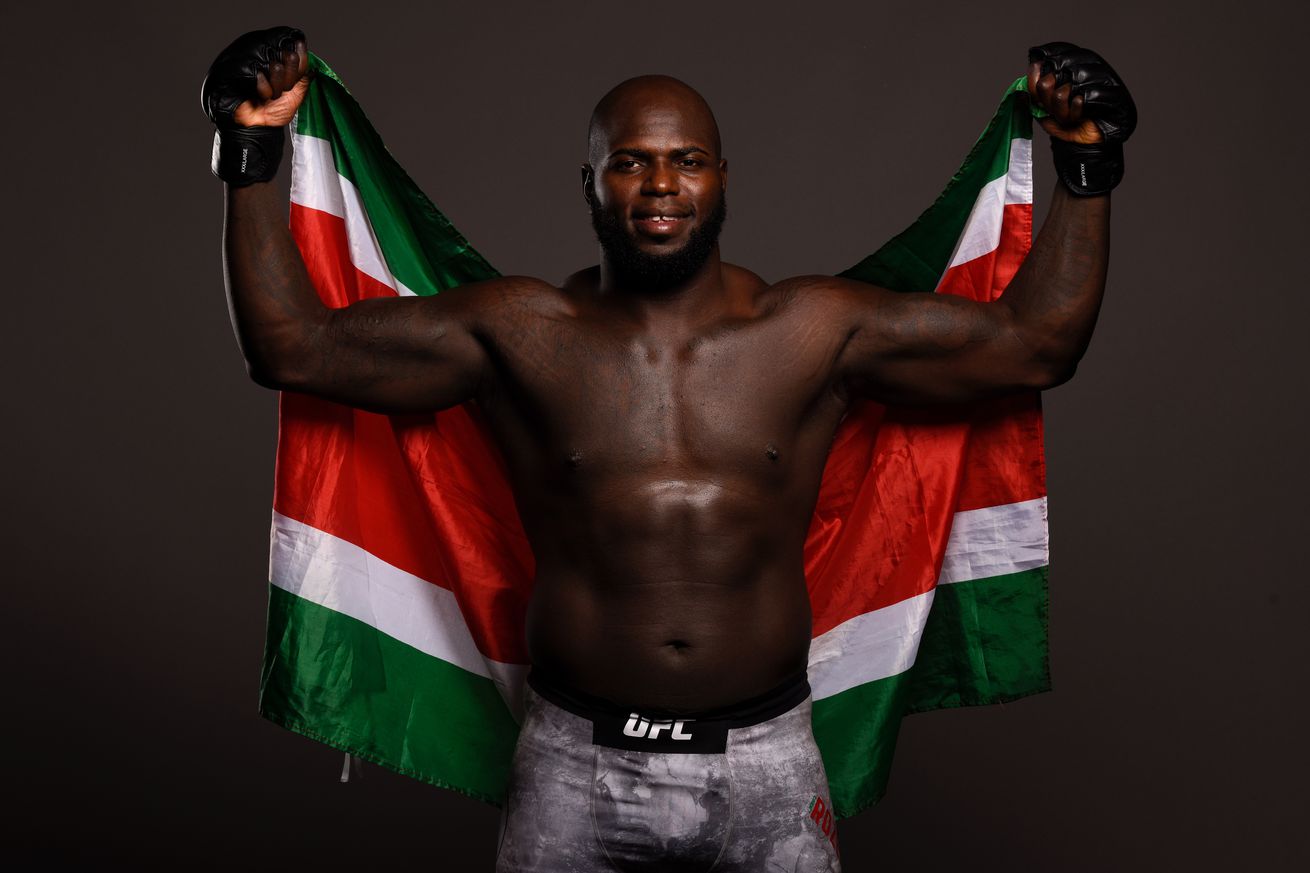 When Jairzinho Rozenstruik steps into the Octagon this Saturday night as the fill-in for Walt Harris opposite Alistair Overeem, it will be a massive step up in competition for “Bigi Boy.” The Surinamese athlete may have a wealth of professional kickboxing experience, but he has less than 10 professional MMA fights, and he’s only been a member of the UFC roster since February.

Yet, Rozenstruik has plenty of confidence, enough to plan his next match too. More than that, Rozenstruik took an opportunity at today’s media workout to once again express an interest in facing top contender Francis Ngannou, transcribed courtesy of MMA Junkie:

“It would be a nice fight. He’s the scary guy of the division – the boogeyman. (I’m) the other boogeyman of the division. You want to create a bomb in the octagon? Put me in against him and lock the doors. The UFC fans will enjoy it.”

In addition, Rozenstruik believes that it would benefit Ngannou more to face him than Alexander Volkov, who Ngannou has recently campaigned to fight. “If he’s smart, he’ll take the fight. If not, it’s his fault. I think I can make him better because I’m a better fighter in the end. So if it was me, I’d take the fight.”

Rozenstruik’s confidence and forward thinking definitely deserve a bit of credit. Before we can get too excited, however, Rozenstruik must first find a way past “The Demolition Man.”

Mike Perry and Elias Theodorou sparring is definitely worth a watch:

I had to post the second minute because he controlled the whole first minute and I realized where this round was headed. It became a battle of the smallest positions. He was able to strike often in some positions while also defending the grappling! Was great to have this talented athlete in the gym to train with us. Thanks for the work @eliastheodorou ! #Os

Shin conditioning is a very important and often overlooked aspect of MMA, so here’s Stephen Thompson with some tips.

This man has style.

A post shared by Amateur Boxing Highlights (@amateurboxinghighlights) on Dec 3, 2019 at 3:28am PST

Tony Ferguson with the not-so-subtle shot at Khabib Nurmagomedov and Ali Abdelaziz.

Darren Till vs. internet trolls is a war that will rage on forever, but luckily, it’s quite entertaining.

Dustin Akbari with the slickness:

This is at least a double.

Mixing it up and having a little fun with @henrihooft during our pad session. – Keep it simple. Keep it light. Keep it fun. – On a scale of 1-10…rate this kick.

Shoutout to the recently-retired Gerald Harris for providing us with some all-time great slam knockouts.

One-punch knockouts aren’t super common in Muay Thai (at least from the footage I see!), but this is a great one.

This is super creative!

A post shared by JAMES//BJJ MOVEMENT COACH (@teamjamesoconnorofficial) on Nov 30, 2019 at 5:33pm PST

Throwback to these process videos from 2018! Slide through to see the method behind the madness

Midnight Music: For any who appreciate jangly Indie pop, you won’t find many bands doing it better than Alvvays.