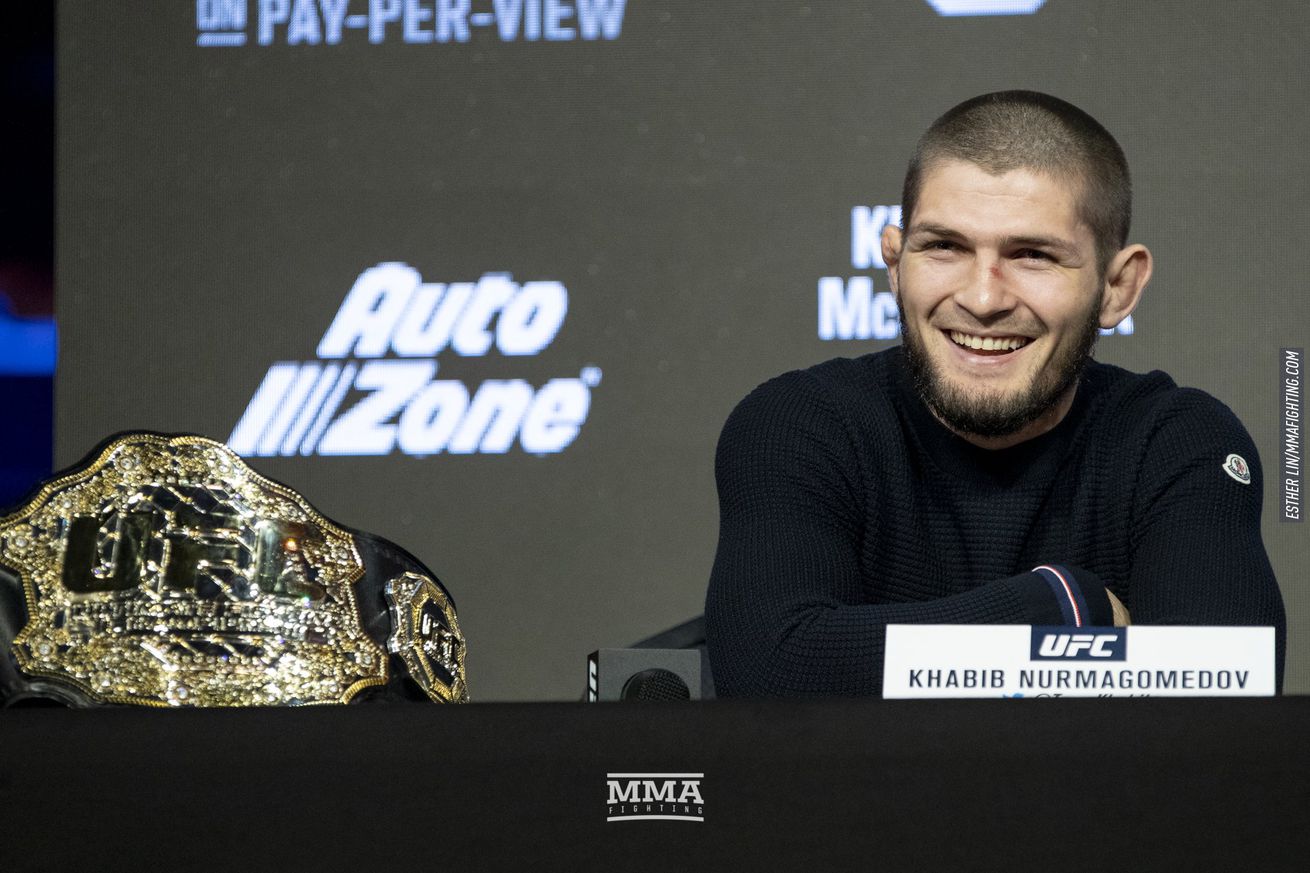 Khabib Nurmagomedov represents Dagestan, and while some athletes might feel a burden to carry the weight of their country into competition, “The Eagle” always seems to do so proudly. He’s sported his famous papakha head-wear even since UFC allowed him to do so, and he’s usually quick to vouch for his team mates and fellow Dagestani athletes whenever possible.

All the same, that part of the world faces a variety of very difficult issues. Those stories are often brought to us by BloodyElbow’s Karim Zidan, the premier journalist on combat sports in Russia and the surrounding area. It’s Zidan who brought tonight’s headlining story from across the ocean, based on a Russian Teacher’s Newspaper interview with Khabib’s father, Abdulmanap Nurmagomedov.

For once, this one seems strictly positive, as the Nurmagomedov patriarch says that Russian President Vladimir Putin has set aside several million dollars for a new school in Dagestan after his son went to Putin with concerns regarding Dagestani education. Oh, and it’s be named for Khabib himself!

Per the interview, the Nurmagomedov family — certainly better off than most given Khabib’s new contract — has already been helping with local issues. Here’s a quote from Abdulmanap courtesy of Google Translate:

“As always, I go to the gym every morning to go to the school playground in my native village, and five, ten, sometimes fifteen people are waiting for me, asking me to help them. Someone to buy a house, someone needs money for a wedding, someone to help pay off a loan, assist in the treatment of a child, send to competitions and so on. Every morning. It’s very hard. We have a charity program – we patronize children’s homes, build a kindergarten, a gymnasium, laid about three kilometers of roads in the village, and now bought equipment to build roads in the mountains.”

As of late, it seems easy to paint Khabib Nurmagomedov as an absolute villain for consorting with known madmen, but there certainly seems to be a softer side to the Dagestani athlete as well. I cannot imagine the balancing act of living in such a dangerous place while being an extremely famous public figure.

“It was a huge motivation for me.”

@BulletValentina speaks about receiving a call from the president of Kyrgyzstan after #UFC238. pic.twitter.com/QMgjjfNgJ0

MMAmania’s own Andrew Coyne will be fighting in San Francisco on Saturday night, and I’ll be in his corner. Send “Bulldog” some love on social media or come watch him work if you’re in the Bay Area!

This seems like a terrible match up for Leben, as Cochrane is not a dozen years past his prime.

MMA veteran Dakota Cochrane will step in to take on UFC legend Chris Leben at #BKFC6!!!

Cochrane has won six of his last seven MMA bouts and is coming off a bare knuckle second-round KO victory over UFC Champ Johnny Hendricks.

Can he hand Leben his first BKFC defeat?

At this point, everyone who reads this column should know I’m a fan of Mike Perry, and those who also read my fight previews know that I’m a believer in his talent too… But Vicente Luque — a vicious sniper of a counter puncher — is one of the worst match ups imaginable for the “Platinum” one. I’d watch it though!

I think this is the main event for UFC Uruguai. What do you say man?! @PlatinumPerry @ufc @UFCBrasil @UFCEspanol @seanshelby @AliAbdelaziz00

Danis didn’t even wait to actually win a single to copy his Irish training partner yet again.

Tyson Fury looking slick as ever on pads.

Practice Offence and defence until it looks like a smooth dance

This Saenchai post could really be the entire section of clips.

A spinning backfist with no load up or tell is dangerous stuff, particularly when hidden by feints.

A karate master! @kvn_usa puts his dynamic style on display at #GLORY67

Me *swallowing 4th wet t-shirt* this contest is hard

Revisiting the Captain Caveman Lift. One-armed zercher hold with 315lbs with the barbell on fire while throwing a homemade spiked club into the target. Just because I can’t stand being civilized… and @thedavidweck it’s holding bin a coil…Join #NoahsArmy and become a real savage and a #blooddonor and #organdonor today. #strengthfeats #funwithstrength #uncivilized #strongman #oldtimestrongman

Music from the making of Midnight Mania: Deafheaven’s 2015 LP New Bermuda sees the band continue to mix black metal with shoegaze and other softer sounds while remaining thoroughly dark and moody. Purists argue it “hipster metal,” but I like the blend just fine. Also, the album cover is damn pretty in person.