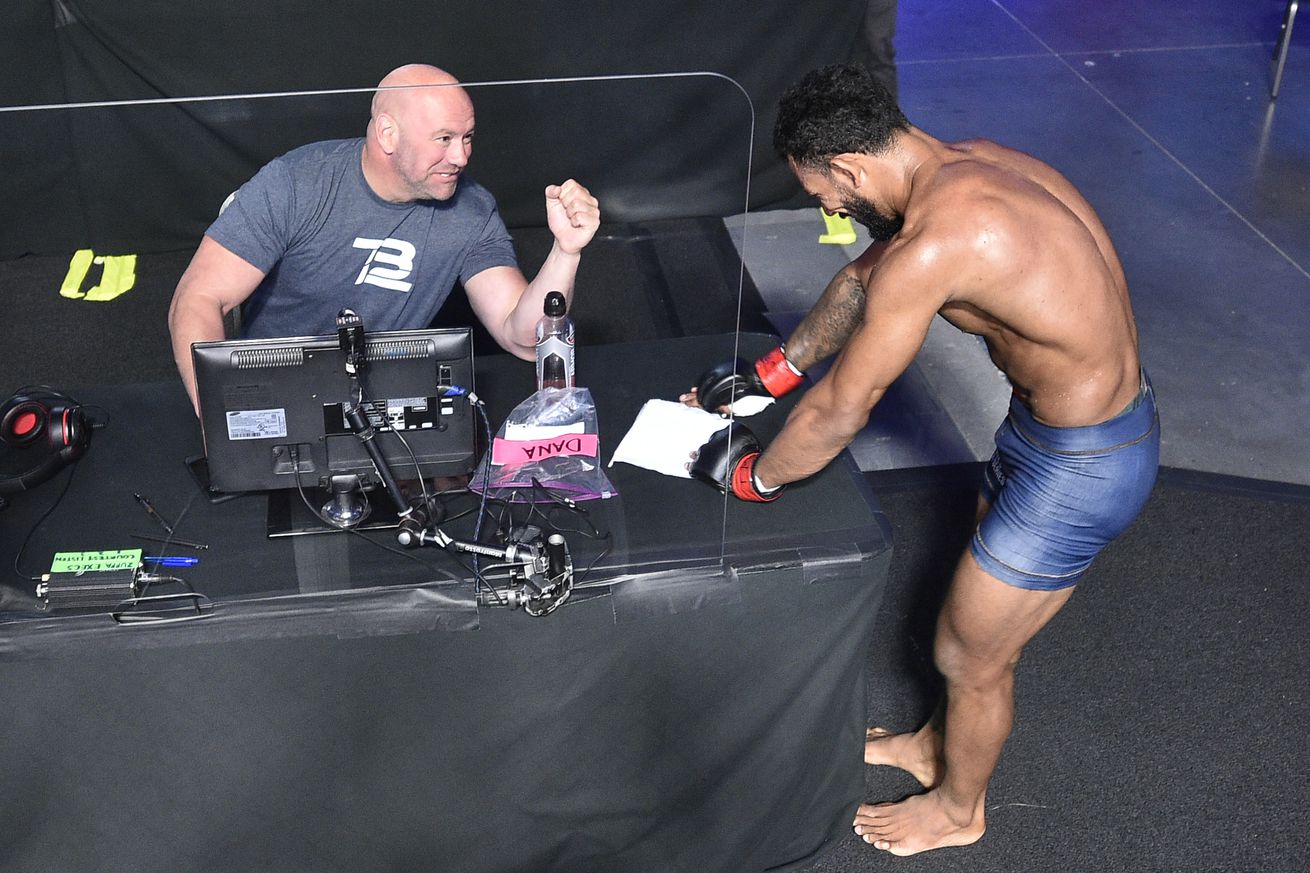 The world’s “toughest job interview” continues this evening as 10 fighters “vie to fulfill their dreams of earning a UFC contract.”

Round one: Rodrigues opens with a body kick. Good knee in the clinch, jab connects. Counter right. Glancing head kick, hard 2-3. Rodrigues landing well early. Brief clinch. One minute in. Straight right lands for Rodrigues, eats a counter left, lands a hard hook of his own. Body kick lands, glancing head kick. Williams continuing to advance despite the return fire, denies a level change. Another counter right lands for Rodrigues. Another. Two minutes in. Body kick from Williams. Another right hand by Rodrigues, but Williams suddenly rocks him with a heavy straight left. Williams unloads on him against the fence until he goes out.

Round one: Calf kicks from Naimov to start. Anglin tries an overhand right, eats another low kick. Brief clinch. Low kick lands for him in return. Naimov misses with a spinning back kick, avoids a front kick. Anglin leg kick. Naimov lands a low kick and a spinning back fist before getting put on the fence a minute in. Trading knees inside. Naimov reverses, landing knees inside. Two minutes in. Anglin circles off. Right hand behind feints. Naimov lands a right hand and low kick. Two attempts to spin. They collide and clinch. Anglin goes for a takedown, lands on top and takes the back with two minutes to go.

Naimov manages to spin to his feet after a while, then starts teeing off with huge punches. One minute to go. Back to the clinch, looking for knees. He tries his own takedown, gets reversed into side control. 10-9 Naimov.

Round two: Anglin whiffs on a right hand, gets cracked by a 2-3 in return. Naimov misses a head kick and wheel kick. Calf kick by Anglin. Good knee from the Thai plum. Right hand and knee by Anglin as Naimov steps in. One minute in. They separate. Counter left from Naimov. Hard clinch knee lands for him, then one strays low. Jab lands when they resume. Anglin fires some clinch knees and a right hand, waving for Naimov to trade with him two minutes in. Low kick lands for Naimov, then a counter three-piece. Naimov backs him to the fence. Both land in the clinch, then on the break, Anglin digging to the body. Two minutes to go.

Stiff jab lands for Anglin. Low kick from Naimov. Spinning back kick attempt. Anglin catches a knee and takes Naimov down, moving right to the back. Solid shots from Anglin. Hunting for the RNC with a minute to go. More good punches. Now full mount, elbows and punches. He retakes the back to end the round. 10-9 Anglin.

Round three: Naimov definitely looking faded. Uppercut from Anglin, who walks through a nasty counter right to keep throwing. Anglin uppercut again met by a right hand. Trading in the center and a left hook stings Naimov. Anglin opening up, teeing off against the fence. Big right hand. Naimov lands a good right cross but Anglin’s winning this exchange, marching Naimov down. Big right cross. Neimov shoots, sprawled on. Anglin gets back to blasting. Two minutes in. Elbows form Anglin. Naimov tries a spinning elbow, takes an uppercut, whiffs on his own. Another huge uppercut by Anglin. Elbow around the guard. Another elbow. Spinning back fist misses. Naimov shoots again. Two minutes to go.

Anglin denies it, cracks him with an elbow and right cross. Overhand right connects. Uppercut and left hook. Another uppercut. They can stop this. Elbows landing on the fence. Easy takedown into turtle, both hooks in. The forearm’s under the chin, but he can’t get his other free. Naimov sweeps into top position and takes side control. Elbows landing. More elbows, hammerfists. 10-8 Anglin.

Round one: Body kick lands for Kuppe. Right hand form Lombardo after pushing him back. Kuppe with a body kick and right hook before circling off a minute in. Anotehr body kick, then a check hook and flying kick that appears to connect. Lombardo puts him on teh fence. Lombardo gets a body lock. Two minutes in. High crotch puts him on top in guard. Solid shots from guard. Kuppe brings up rubber guard. Two minutes to go.

Kuppe attempts an escape, denied. Lombardo comes back with a hard elbow. One minute to go. Lombardo waves Kuppe up. Kuppe looks for a spinning back kick, whiffs on an uppercut. Step-in knee blocked. Lombardo changes levels and gets caught in a palm-to-palm guillotine. Saved by the bell. 10-9 Lombardo.

Round two: Lombardo steps back into the clinch. Kuppe slapping him in response. Lombardo gets double unders, tries the same takedown as before, denied. Knees to the legs from Lombardo, moves to the rear waist lock. Two minutes in. Ref wants more action. Lombardo lands a shot, Kuppe compliments it. Lombardo finally drags him down with just over two minutes to go.

Elbows from Lombardo. Staying on top near the fence. Still chipping away with a minute to go. Decent elbows. 10-9 Lombardo.

Round three: Lombardo steps right back into the clinch. Short right hands. Kuppe jumps guard. One minute in. Minimal action from guard. Two minutes in. One decent punch from Lombardo. Two minutes to go.

Lombardo occasionally throwing. Kuppe works to stand with a minute to go. Behind-the-back elbows. Another high-crotch into side control. Back to guard. Kuppe looks to set up a reverse triangle at the bell. 10-9 Lombardo.

Round one: Wolf lands an early counter right. Low kicks from Tennant. Oblique kick lands. They trade low kicks. 1-1-2 from Wolf. Tennant low kick and body kick soon after. Two right crosses land for Wolf. 2-1-2 knocks Tennant back and she looks a little off-balance. Another right cross. Continuing to land. Now Wolf circling as Tennant advances, the latter looking for side kicks. Wolf answers a body kick with a right cross. Things slow down for a bit. Tennant ties up after taking a jab. Wolf with some short punches inside, frames and separates. Jab from Wolf. They trade lefts, then a cross lands for Wolf. Jab lands, cross behind it does not. Tennant ducks a punch for a level change, denied, eats a jab for her trouble. She lands a teep. 10-9 Wolf.

Round two: Apparently the fight clock is still broken.

Right hand from Tennant connects, advancing with low kicks. She punches her way into the clinch, shoved away. Another shot, grabs the body lock. They separate. Wolf tries a 1-2. Low kick exchange. Long right from Wolf, who takes an eye poke. She comes back throwing, falls short with everything. Tennant pops her with a jab. Wolf jab, Tennant low kicks. Wolf just keeps falling short. Now some low kicks from her. Hook lands for Tennant. Wolf catches a kick, doesn’t follow her down. Right cross lands for her. Body kick blocked. Tennant with some nice combinations and a body kick appears to hurt Wolf. Tennant swarming, knocked back by a right hand. She shoots, looks for an outside trip. 10-9 Tennant.

Wolf looks for combinations early, only to walk into an agonizing eye poke. She ties up when they resume. They separate. Wolf tries a high kick. Some big swings, nothing landing. Still swinging, still missing. Tennant ties up and looks for an outside trip. Wolf slowly works her way towards a guillotine, then jumps guard on it. Plenty of squeeze, but Tennant stacks her. Two minutes to go.

Tennant passes to side control, then side control. She’s in position for a Von Flue if she wants it. Now Wolf abandons the headlock, tries to make space, can’t stand up. Tennant jumps back down on top of her. 10-9 Tennant.

Round one: Driscoll looking to jab early. Paiva catches him throwing a leg kick with a counter right, doesn’t follow him down. Driscoll low kick met by a body jab. Counter 3-2 from Driscoll. One minute in. Driscoll low kick, fires a combination, lands a knee that Paiva catches. Driscoll gets his leg out and shoots. Knees on the break. Head kick attempt two minutes in. He switches from a single-leg to a double-leg and briefly takes the back. One hook in against the fence with two minutes to go.

Paiva manages to separate, tries a 1-2, eats a low kick with a minute to go. Straight left from Paiva. Driscoll just misses with a head kick, tries it again. Calf kick connects. 10-9 Driscoll.

Round two: Driscoll tries a head kick to start. Paiva body kick. Counter 1-2 from Driscoll. Paiva 1-2 to the body, takes a lead right. Driscoll answers a right hook with a low kick that lands to the groin. He pops Paiva with a right hand right as they resume. On eminute in. Driscoll tries a single-leg, denied, lands another low blow. Counter 1-2 glances off, front kick lands to the body. Paiva body kick, avoids a Brazilian kick. He denies a shot two minutes in. Both fall short with punches for a stretch. Paiva takes a finger in teh eye. They trade low kicks when they resume. Driscoll advancing, fakes a shot, looks for right hands. Two minutes to go.

Round three: Driscoll sending out kicks, lands a counter right. Parts of a combo land for him. They trade straights in the center. Paiva lands a low kick, gets cracked by a chopping 1-2. Driscoll shoots but gets denied by a switch. One minute in. Counter right lands again for Driscoll. Paiva 1-2. They trade lefts. Paiva lands a 1-2 downstairs. Swatting righ thooks, then a straight left that drops Driscoll two minutes in. Driscoll scrambles into a takedown attempt, denied by the switch once again. Paiva looks for a 10-finger guillotine before taking him down into half guard. Elbows landing. Driscoll regains guard with two minutes to go.

Paiva easily postures out of an armbar attempt and looks for side control. Driscoll answers with a knee shield, then regains guard again. Another armbar, elbow isn’t in. Paiva stands and comes back down with a left hand. Driscoll suddenly sweeps directly onto the back. He holds onto the front headlock as Paiva stands, looks for the back, loses position looking for an armbar. Paiva drops some punches from top position, then gets swept into turtle. 10-9 Paiva.

For more “Contender Series” news and notes, be sure to hit up our comprehensive archive right here.