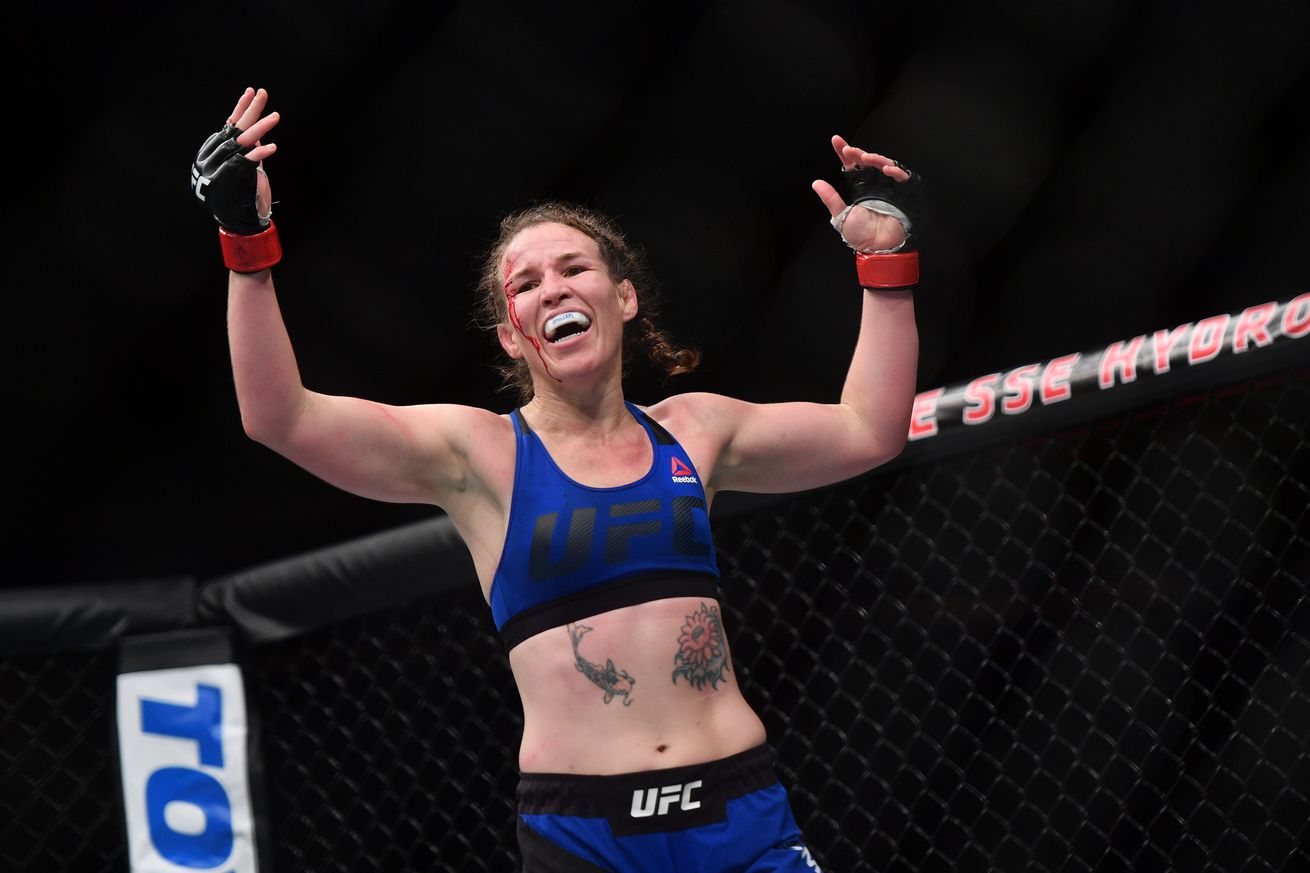 Bellator 224 “Budd vs. Rubin” takes place July 12, 2019 at WinStar World Casino and Resort in Thackerville, Oklahoma. Leading the charge that night will be another Featherweight title defense for “The Jewel” Julia Budd (12-2) against the undefeated Olga Rubin (6-0).

As often seems to be the case when Bellator comes to Thackerville, a slew of women’s MMA fighters are also featured in prominent fights. Surprisingly one of the biggest bouts is slated for preliminary action that will be exclusive to DAZN. Former UFC star Leslie Smith (10-7-1) returns to Bellator for the first time in 10 years to face Sinead Kavanagh (5-3) at 145 lbs.

Smith has fought a who’s who of top ranked women in multiple weight classes over her tenures at Invicta FC and UFC, and she holds wins over Raquel Pennington, Rin Nakai and Irene Aldana as a result. She also had one of the most bloody and gruesome ear injuries EVER at UFC 180 and still wanted to fight — a doctor had to halt the contest.

Despite being on a two fight win streak before departing UFC she’s now with Bellator and fighting “KO” Kavanagh on Friday. Today Leslie Smith talks about her first Bellator fight in ten years.

“I’m pretty excited about it. I’m happy to be inside of a promotion that I feel allows fighters to be individuals and gives them more of an opportunity to grow inside of their personalities and with their expressions of themselves. It’s pretty cool.”

If it seems like Smith is as happy to be somewhere other than UFC as to be fighting on Friday night you’re not mistaken. Smith has known for a while that the door was open.

“I know that Bellator and Scott Coker have a great relationship with my teammates and coaches, Gilbert Melendez and Keri Melendez, and so it’s pretty cool to get to be part of the circle.”

For Smith this is not the same organization she competed in at Bellator 7 in 2009. Back then it was the “Bjorn Rebney Era” but now they’re under the Viacom umbrella with Mr. Coker.

That’s not to say Bellator doesn’t still handpick beatable opponents to groom their future stars, but you don’t bring in a nearly 20 fight veteran to feed to someone who is 5-3.

“I actually have a name myself. Women’s MMA has come so far. It’s come incredibly far.”

At this point Smith apologized for being “a bit verbose” but the story she told from the early days of her career was to make the point about just how far it has come in a decade’s time.

“My very first fight was an amateur fight and the announcer was having fun on the microphone. It was after (only) a month of training so I almost didn’t want to take the fight, like ‘What kind of skills am I even going to have? But I REALLY want to fight, so I’m gonna do it.’ I was worried it was going to be a freak show because there weren’t a bunch of women who fight, but everybody loved a ‘chick fight’ back then. When we came out the announcer was like ‘Introducing LUSCIOUS Leslie Smith!’ And then for my opponent, he said ‘DELIGHTFUL Danette Beniamino!’ I was like ‘Oh my God, is this happening?’”

The sexist announcer may have unintentionally fired Smith up, because she won her debut by knockout 47 seconds into round two. From that point on it was off to the races.

“Even by the time that I got to Bellator, everyone there was respectful and it was wonderful — I definitely got treated like an athlete. Still, the opportunities for women weren’t really there, and I was brought in as an opponent for Kerry Vera. Fast forward all the way to now to where I’m an established fighter and I’ve had a career for a decade, and I’m fighting another woman being flown in from Ireland who has had a two sport career in combat sports. It’s a legitimate fight with legitimate skills and we’re both well rounded enough to be fighting at the highest level here in Bellator.”

With all that said it’s still surprising that Smith was shown the door off a two fight win streak in UFC, but then as now Smith maintains it’s payback for trying to unionize fellow fighters.

“It’s pretty unusual for fighters to get cut, not just on a two fight winning streak but when they got a ‘Fight of the Night’ bonus and finished their opponent in the impressive fashion that I did. But things happened. The reason that I got cut from the UFC was because of retaliation by the UFC for my union organizing drive. That is 100% what happened. I will definitely stand behind that statement and make it as many times as I need to.”

Success can be the revenge. Smith can take two years of animosity, bottle it up in training, and unleash it on Sinead Kavanagh. “Ring rust?” Not for Leslie “The Peacemaker” Smith.

“I don’t believe in ring rust. I don’t think that it exists — at least, it doesn’t for me. I think some people get up in their heads and they mind fuck themselves a little bit before they get into a fight, but that can happen with anybody, with any fight, any opponent, any time. My biggest thing is I just want to go in there and have fun.”

Don’t mind f*** yourself into missing this fight, exclusive to DAZN as a featured bout of the Bellator 224 prelims on Friday night.

Complete audio of our interview is embedded above, and complete coverage of “Budd vs. Rubin” resides here at MMA Mania all week long.

To check out the latest Bellator MMA-related news and notes be sure to hit up our comprehensive news archive right here.